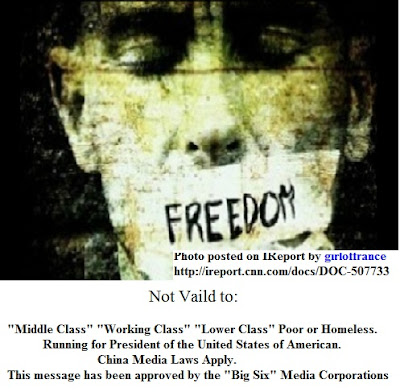 "China’s censorship policies in both the new and traditional media sectors. Just what the Chinese government wants
its people to know. "http://www.chinatalkingpoints.com/audio-"exploring-the-limits-of-Chinese-censorship/."
Submitted by Eric Olander on February 14, 2011.
Now I will edit the above statement to be truthful about United States media.
The "Big Six" Media Corporations, censorship policies in both the modern and traditional media sectors. Just what they want the citizens to see.
Time Warner-CNN is the best news source, but CNN denies access to "Middle Class" Candidates that do not have lots of money, equal time that they give to the Wealthy, Politician's, and Famous People. The other Five of the "Big Six" Media Corporations denies any access or equivalent time to any unknown, unfunded, "Middle Class" candidates. The Majority of all Presidential candidates running for all parties or independent listed on,"http://2012.presidential-candidates.org. I am also listed as an Independent, on the same site that all the wealthy, Politicians, and well know that are given free access to all media. I announced my candidacy for President-2012, March 3, 2011. What is Real Ridicules What is Real Ridicules, is that it appears that the "Big Six" Media Corporations and the several thousand reporters do not use the computer or know how to find out all candidates for the presidency, except the Wealthy, Connected, and Famous. What is amazing is all the candidates they intervieware wealthy, "upper Class" and Millionaires. Is it possible they do not like for the "Middle Class" that is over 72% of our population, and the "Working Class" to pick one of their own from "Middle Class". Not in American, that would not ever happen. Besides, we can see how splendid the wealthy "Upper Class" Politician's have done for American since 1945. Maybe if, I go down Main Street USA,  Naked, with a sign, vote for Charles Harvey, I would receive coverage for 2 weeks daily.