Questions from a Supporter, Answer’s from a "Middle Class" presidential candidate-2012 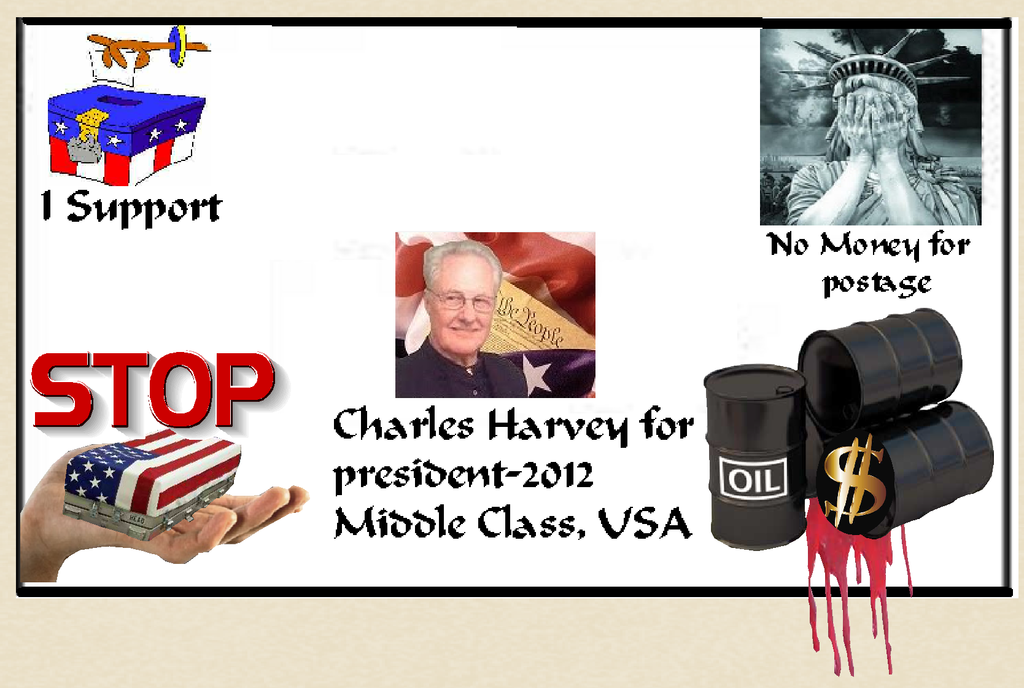 From a supporter (I deleted the name and email for the purpose of them not suffer guilt by association.
On Oct 6, 2012, at 1:48 PM, a href="mailto:gtcteach08@yahoo.com">yahoo.com> wrote:
Mr. Charles Harvey, Good afternoon. How are you these days? We are alright, not the best but not the worst. I still count many blessings despite some challenges. Do you have any updates on the status of the election? Have you seen the debates? I watched the first one earlier in the week. What do you think at this point? I just wanted to send greetings to say 'hi'. I have enjoyed our e-mail conversations. I hope your days are good days. I send best wishes to you and your family. Respectfully,
My Reply:
All of my research points to President Obama as the safest pick over Romney by far. True hell will come from having Mitt Romney as president.
But, the "middle class" are victims by their own choices, for over a year I had a petition for people to sign to just give me a voice on CNN, a total of 26 Americans signed it. They are brainwashed and controlled by media. They blame others for our ills when if they look in the mirror they will see who is allowing the destruction of America, the voters. I feel sorry for the young, the children and grandchildren that will suffer as America follows the path of the Roman Empire.
We are headed for the darkness of the abyss.
Abandon ship sailor God bless you and your family. I will stay at the helm till my last breath
Sent from Charles Harvey for President 2022 iPhone

From a supporter (I deleted the name and email for the purpose of them not suffer guilt by association.
Date: Sun, 7 Oct 2012 16:28:43 -0700 From: @yahoo.com Subject: QUESTION To: charleseharvey@live.com
Mr. Charles Harvey, I appreciate your prompt reply to my message. I thank you for sharing your insights too. I just have a question about one of your statements. What are you suggesting by saying 'abandon ship' in this context? Again, I always send best wishes to you and your family. We all need prayers. Our great nation needs prayers too. Have a good day. Respectfully,
My Reply:
As to my meaning: 'abandon ship' in this context? The ship is named the USS America. It is sinking and is beyond repair because of those in government. I doubt if God will help or answer the prayer of the majority of America that say they are Christians, especially our Government and the "One Percent" that do not repent or ask forgiveness and are self-serving and do not care for all God’s Children.
American today is far worse than Sodom and Gomorrah, and they do not follow the words of Jesus Christ. God will always answer the prayers of true Christian’s that repent and ask for forgiveness. America today is far worse than Sodom and Gomorrah. We Americans are the only ones that tell the world with no humility that we are the greatest country in the world. That is what the Rome Empire believed. Please go through my Blogs that I researched about America, and our Government. Here is an example:
http://charliebigfeet.blogspot.com/2012/03/stop-interfering-and-fun...
As to 'abandon ship' I believe that those that are between recent births to the age 35 should prepare for the worst economically. Buy gold, good in the entire world. Buy no perishable food in bulk when prices are the lowest at places that sell by the cases. There will come a time clean drinking water drinking water will be scarce. So, store up 5 gallon bottles of water. Please remember that these recommendations do no harm because if America does prosper you can use all these items you paid for at the lowest prices. One out of every six people in the world does not have clean drinking water. There are scientists that have said that the next war after oil will be for water.
It is Ironic that the orthodox Jews do not believe Jesus Christ is the son of God or the Lord and savior; they just believe he was a good teacher. Yet, American that claims to be a nation under God and Christians has given more money to Israel than any other nation in the world since they became a state in 1949 under Harry S. Truman I believe. Since 1949 the U.S. has given Israel a total of $83.205 billion. The interest costs borne by U.S. tax payers on behalf of Israel are $49.937 billion, thus making the total amount of aid given to Israel since 1949 $133.132 billion. This may mean that U.S. government has given more federal aid to the average Israeli citizen in a given year than it has given to the average American citizen. http://wrmea.org/archives/494-congress-a-us-aid-to-israel/9748-u-s-...
Also 75% of the funds have go toward military weapons and their military budget. They are the ones that killed the Iran nuclear scientist. They most will start the next world war. Think about it. American created the first weapon of mass destruction, and the first to use in on civilians. They tell Iran they cannot have nuclear weapons (look at the military map in the above Blog that shows a complete US military circle around Iran. Gosh, I wonder why they would want nuclear weapons since we are the humanitarian leaders of the world. However, We except Pakistan's with nuclear weapons and give them billions of dollars. Yet, they had no idea Obama Bin Laden was living next to one of their military academy in a Huge walled in complex for 9 years.
Here is more about the games played by our government and others countrieshttp://charliebigfeet.blogspot.com/2012/05/government-games-cost-li...
I'm old fashioned American that believed our Government and the Media told us the truth in 1940-1950 until our US Regulars landed in Vietnam in '65. After that the lies and propaganda started, later the Media pick sides with the "One Percent" and have been manipulating the "Middle Class" (72% of Americas Population. to this very election in 2012. And, because of the voters and the power in the hands of the wealthy American will continue toward the dark abyss. I feel sorry for what the young children will have to go through. Remember that the Pharisees are alive and well in Congress.
God grant you Peace and Love for you and your loved ones.
Charles Harvey- The Voice in the Wilderness