First Things I Will Do As Your President.


As of August 2, 4,683 brave Americans have died in Iraq and Afghanistan since the launch
http://usmilitary.about.com/od/terrorism/a/iraqdeath1000.htm 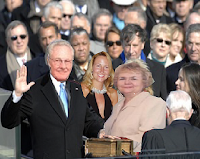 I had a little fun by cutting and pasting myself being sworn in, and my daughter between me and my wife that is an angel in heaven now.
﻿
﻿
﻿
After I am sworn in as your President, and on my first day in the oval office.
1. As Commander In Chief, I will call a meeting of all the Joint Chief of Staffs. I will inform them      that I want an immediate withdrawal of the American Military from all Middle East Islamic/Muslim countries with no American left on their soil.It cost us most American lives. Blood of mostly young Americans while no Politician was killed or wounded, that create the war that we did not need to be in. And it cost so much money that could have been used on Americans here at home. Iraq War Facts, Results & Statistics at September 30, 2011 By Deborah White, About.com Guide
Spent & Approved War-Spending - About $1 trillion of US taxpayers' funds spent or approved or spending through 2011Cost of deploying one U.S. soldier for one year in Iraq - $390000 ﻿
The military of the United States is deployed in more than 150[1] countries around the world, with more than
369,000 of its 1,580,255[2] active-duty personnel serving outside the United States and its territories. Most of these overseas personnel are deployed in combat zones in the Middle east, as part of the "War on Terror". Many of the remainder are located
at installations activated during the Cold War, by which the US government sought to counter the Soviet Union in the aftermath
of World War II.Afghanistan – Approximately 103,700 US personnel[3] as of December 31, 2010.
http://en.wikipedia.org/wiki/United_States_military_deployments

2. As president I know than many military men and woman will be discharged and many with little chance of
employment with 9% unemployment.The will have very specific skills use mostly or military applications. So I will recommend that our Government offer $20,000 reenlistment bonus for another 2 years. Those that accept the enlistment will be assigned to military facilities closes to their homes. I also will also seek the Joint Chief of Staff opinions as to giving the reenlistment's one week on duty and one week off duty for the first year of the 2 year enlistment.

3. I will inform the Joint Chief of staff that we will put a moratorium of new weapons, that the budget will be for maintaining military personnel and equipment. Point being that the United States spends more than all countries in the entire world, and spend 600$ more than Chine that is second.We have the a military and equipment to win any war unless it is Armageddon.

4. I will ask each and Universities and Colleges in American to Grant a free scholarship to 10 Veterans each that have a High School Diploma or GED. All Trade schools in American will e asked the same.

5. I will then see what powers as President I have or what needs to be done to stop all funding to all Islamic/Muslim Countries in the Middle-East. Middle-East Muslim,Islamic countries can start helping each other.

We are going to devote all the dollars we give to those Middle-East countries and spend every time on America and. Especially on the Veterans returning or have returned from the Middle-east combat zones.

Well that should keep me Busy for the a couple  of Months.