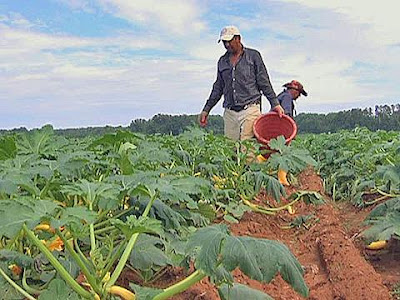 All Illegal
Immigrants that work in agriculture, that is a $5.23 billion economy in America,
that the US Farmers Depend on Illegal Immigrants.

I would ask you to not
to go to work in 2012 for the entire crop session. That would hit the entire
fields and orchards like the worst Locus in recorded history.

It would
shut down many farms. All agriculture products at the markets, that were
available would double and triple in price. Then Maybe USA would see how
important you are to us. I am a Caucasian-American the love and respect Latinos
culture because, I was raised in Watsonville, California, a leader in lettuce
and strawberries among many other agriculture products. I went to school and
lived in orphans with Latinos and blacks. I never had a dad to tell me other
races were not as good as me.

The union, United Farm Workers, says it got
more than 86,000 inquiries to its campaign from across the nation.for people to
pick crops, But only 11 workers actually wound up taking jobs.

"Understand that
these are $12, $13, $14, $16, $18 an hour job," Black told 90.1 WABE-FM’s Denis
O'Hayer in an interview. "Talked to a gentleman yesterday, they
had a crew of people, they were going to make $130 a day picking cucumbers.
That’s 130 buckets of cucumbers, $1 per bucket."
Up to $18 an hour? That’s
more lucrative than flipping burgers or greeting customers at Walmart. Suddenly,
picking cucumbers seemed like a viable Plan B.


I believe that we
should give Amnesty on condition they pay taxes set by the US Government, and
given Social Security Numbers.Why Farmers need them to work in the filed and
"lower-class" jobs that American will not take even at almost 10% unemployment
and it will reach 13% in a Year.

There is no way we can capture 12
million illegal's in American. And whatever we do capture will be back again.
The electric fence and electronic sensors for 2000 mile along US/Mexico boarder
is a joke and a waste of money.
It is so easy to bypass security systems
except at Fort Knox. Boarder patrols have found 42 tunnels, But what about6 t5he
next 42 and the next6 42 tunnels.-
America the Melting Pot.
The melting
pot is a metaphor for a heterogeneous society becoming more homogeneous, the
different elements "melting together" into a harmonious whole with a common
culture. It is particularly used to describe the assimilation of immigrants to
the United States; the melting-together metaphor was in use by the
1780s.

After 1970 the desirability of assimilation and the melting pot model was challenged by proponents of multiculturalism, who assert that cultural differences within society are valuable and should be preserved, proposing the alternative metaphor of the mosaic or salad bowl – different cultures mix, but remain distinct.
http://en.wikipedia.org/wiki/Melting_pot

The
Mexico–United States barrier — also known in the United States as the border
fence or border wall — is actually several separation barriers designed to
prevent illegal movement across the Mexico – United States border. The barriers
were built as part of three larger "Operations" to taper transportation of
illegal drugs manufactured in Latin America and illegal immigration: Operation
Gatekeeper in California, Operation Hold-the-Line [1] in Texas, and Operation
Safeguard[2] in Arizona. The barriers are strategically placed to mitigate the
flow of illegal border crossings along the Mexico – United States international
border into the Southwestern United States. Construction supporters cite the
ongoing escalation of national security risks, relating to Cartel border
violence,and their possible co-operation with overseas terrorists. Opponents
claim the barriers are a taxpayer boondoggle, an ineffective deterrent and that
the barriers inappropriately jeopardize the health and safety of those seeking
illegal entry into the United States, as well as destroy animal habitat, prevent
animals from reaching water, disturb animal migration patterns, and otherwise
damage the environment. Despite this barrier, the US Mexican border is
considered
http://en.wikipedia.org/wiki/Mexico_%E2%80%93_United_States_barrier


Even
the long recession doesn't seem to be increasing native-born Americans' appetite
for menial labor. Last year, the United Farm Workers union started a "Take Our
Jobs" campaign. The idea was to attract Americans to take the jobs of migrant
farm workers, the overwhelming majority of whom are illegal immigrants.
The
union says it got more than 86,000 inquiries to its campaign from across the
nation. But only 11 workers actually wound up taking jobs.


The Pew
Hispanic Center used Census Bureau data to estimate that the United States had
11.1 million illegal immigrants in March 2005. The center used monthly
population estimates to project a current total of 11.5 million to 12 million.

The report estimates that 850,000 illegal immigrants have arrived in United
States each year since 2000.
http://www.breitbart.com/article.php?id=D8G6U2ko8

he
number is expected to reach 250 million by 2012 and surpass 300 million ... to
describe low-wage workers performing manual labor in the agriculture field;
Migrant worker


estimates about 12 million illegal immigrants lived in
the U.S. in 2004.
http://conservapedia.com/Illegal_immigration#Numbers_of_people
T
The
High Cost of Cheap Labor: Illegal Immigration and the Federal
Budget

Households headed by illegal aliens imposed more than $26.3
billion in costs on the federal government in 2002 and paid only $16 billion in
taxes, creating a net fiscal deficit of almost $10.4 billion, or $2,700 per
illegal household.

• Among the largest costs are Medicaid ($2.5 billion);
treatment for the uninsured ($2.2 billion); food assistance programs such as
food stamps, WIC, and free school lunches ($1.9 billion); the federal prison and
court systems ($1.6 billion); and federal aid to schools ($1.4
billion).

• With nearly two-thirds of illegal aliens lacking a high
school degree, the primary reason they create a fiscal deficit is their low
education levels and resulting low incomes and tax payments, not their legal
status or heavy use of most social services.

For fiscal years 2006
through 2009, the SBI program received about $3.6 billion in appropriated funds.
Of this amount, by late 2008 about $2.4 billion had been allocated to complete
approximately 670 miles of vehicle and pedestrian fencing along the roughly
2,000 miles of border between the United States and Mexico. In March the
Tactical Infrastructure / Border Fence Program was transferred to U.S. Customs
and Border Protection (CBP) Office of Finance, Facilities Management and
Engineering (FM&E) from the Secure Border Initiative (SBI).
As of
January 22, 2010, CBP had completed roughly 643.3 miles of fencing (344.8 miles
of primary pedestrian fence and 298.5 miles of vehicle fence) along the
Southwest Border. Generally speaking, pedestrian fence is located in urban areas
and adjacent to ports of entry, whereas vehicle fence is located in relatively
unpopulated and remote areas of the border. When finished, the Department will
have constructed a total of approximately 670 miles of pedestrian and vehicle
fence along the Southwest Border.
http://www.globalsecurity.org/security/systems/mexico-wall.htm
•
On average, the costs that illegal households impose on federal coffers are less
than half that of other households, but their tax payments are only one-fourth
that of other households.

• Many of the costs associated with illegals
are due to their American-born children, who are awarded U.S. citizenship at
birth. Thus, greater efforts at barring illegals from federal programs will not
reduce costs because their citizen children can continue to access
them

Amnesty
If illegal aliens were given amnesty and began to pay
taxes and use services like households headed by legal immigrants with the same
education levels, the estimated annual net fiscal deficit would increase from
$2,700 per household to nearly $7,700, for a total net cost of $29
billion.
http://www.cis.org/node/54


"I have to live for others and not for myself: that's middle-class morality."