Why American helps some Middle East Countries" It is not for Humanitarian reasons. Why Iran is a problem to America? 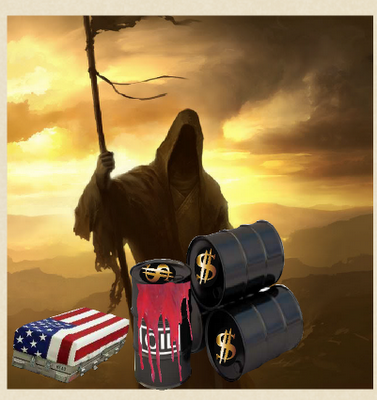 First I will show you a map that should show you why America is rattling their
Saber over Iran. 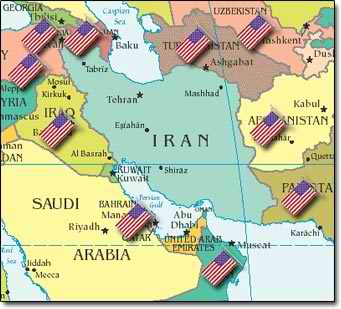 Why American does'nt get involved in Syria for humanitarian reasons as they said they did for Libya?

Libya's oil deposits produce some of the finest crude which is the primary source for Europeans. Syria produces about 400K bbls of oil per day compared to 1600K bbls for Libya.
Why America declared war on Iraq stating it was for humanitarian reasons?

Department of Energy (DOE) Energy Information Administration (EIA) figures claiming that the territory of Iraq contains over 112 billion barrels (bbl) of proven reserves—oil that has been definitively discovered and is expected to be economically producible. In addition, since Iraq is the least explored of the oil-rich countries, there have been numerous claims of huge undiscovered reserves there as well—oil thought to exist, and expected to become economically recoverable—to the tune of hundreds of billions of barrels. http://www.brookings.edu/research/papers/2003/05/12globalenvironmen...

Why did America go into Afghanistan?

There is some evidence that America could have had an economic motive for replacing the government in Afghanistan. Did this influence America's decision to invade Afghanistan and replace the government? The evidence presented below may be sufficient to raise serious questions about the motivations behind U.S. President Bush's decision to invade Afghanistan, especially in light of Bush's substantial links with the oil industry. Furthermore, recent reports indicate that the September the 11th disaster, which triggered the "war on terror" military campaign, could have been prevented. If there is enough public support, we will issue a formal request for a public statement from the American government. In the meantime, we invite you to consider the evidence below and form your own opinions.

America has wanted a new government in Afghanistan since at least 1998, three years before the attacks on 11 September 2001. The official report from a meeting of the U.S. Government's foreign policy committee on 12 February 1998, available on the U.S. Government website, confirms that the need for a West-friendly government was recognised long before the War on Terror that followed September 11th: "The U.S. Government's position is that we support multiple pipelines... The Unocal pipeline is among those pipelines that would receive our support under that policy. I would caution that while we do support the project, the U.S. Government has not at this point recognized any governing regime of the transit country, one of the transit countries,
Afghanistan, through which that pipeline would be routed. But we do
support the project."

"The only other possible route [for the desired oil pipeline] is across, Afghanistan which has of course its own unique challenges."

Looks like their imaginary boundaries are moving even farther east… Over 50 U.S. airbases…insane…and this was in 2008! Remember, the U.S. is Israeli Zionism’s puppet so you can pretty much count that Israeli territory in the making in a sense. The US and Israel have become one and the same. Just ask a fundamentalist Zionist Christian who’s proud to send American youth to die for this mythical cause. How bamboozled can you get. And Iran is clearly in the way…. Let’s see how the U.S. was positioned even then to wage war on Iran. The days are counting down.

U.S. military bases circa 2008. Imagine now, plus the US Fleet.. Is “Greater Israel” just Another Smokescreen Justification? http://www.zengardner.com/the-zionist-drive-for-greater-israel/ http://www.thedebate.org/thedebate/afghanistan.asp

"CentGas can not begin construction until an internationally recognized Afghanistan Government is in place." [ "U.S. Interests in the Central Asian Republics", 12 Feb 1998 ]

The Afghanistan oil pipeline project was finally able to proceed in May 2002.This could not have happened if America had not taken military action to replace the government in Afghanistan.

THE CONQUEST OF AFGHANISTAN BEGAN BEFORE 9/11

The war on Afghanistan was sold to the public as a reaction to the attacks on 11 September 2001. However, the war was planned before the infamous 9/11 disaster, and the military action began long before the World Trade Center fell.

The conquest of Afghanistan had been planned since at least 12 February 1998, and 9/11 happened just in time to secure public support for the attacks.

Up to 80 cruise missiles were fired at Afghanistan and Sudan in August       An American-funded training project in Afghanistan has closed down as a result of the US cruise missile attack on the country in August.       The programme was funded by the American oil company, Unocal, which was once hoping to be involved in building a gas pipeline across the country from Turkmenistan to Pakistan.

No sooner had the Taleban won a series of victories in the north, than the US launched an attack on camps in Afghanistan run by Saudi dissident Osama bin Laden, who had allegedly masterminded the bombing of US embassies in East Africa.

India is believed to have joined Russia, the USA and Iran in a concerted front against Afghanistan's Taliban regime.        Military sources in Delhi, claim that the opposition Northern Alliance's capture of the strategic town of Bamiyan, was precipitated by the four countries' collaborative effort.        Janes International Security News, "India joins anti-Taliban coalition", 15 March 2001.

The aircraft carrier HMS Illustrious has sailed from Portsmouth to lead the biggest Royal Navy and Royal Marine deployment since the Falklands.     HMS Illustrious is the flagship of three groups of warships travelling to the Middle East to take part in exercise "Saif Sareea 2".     More than 24 surface ships from Britain, plus two nuclear submarines, will be completing the 13,000 mile round trip.     The operation, costing nearly £100m, will end with a major excercise before Christmas that will also involve the Army, Royal Air Force and Armed Forces of Oman.     The strike force has been put together to take part in a conflict between the fictional forces of the so-called state of 'Alawham' and those of Oman.

“I want to remind the American people that the prime suspect's [Osama Bin Laden] organisation is in a lot of countries,” Mr Bush told reporters on the White House lawn.        BBC News, "America widens 'crusade' on terror", 16 September 2001.

A former Pakistani diplomat has told the BBC that the US was planning military action against Osama Bin Laden and the Taleban even before last week's attacks.        Niaz Naik, a former Pakistani Foreign Secretary, was told by senior American officials in mid-July that military action against Afghanistan would go ahead by the middle of October.        Mr Naik said US officials told him of the plan at a UN-sponsored international contact group on Afghanistan which took place in Berlin.        ...        The wider objective, according to Mr Naik, would be to topple the Taleban regime and install a transitional government of moderate Afghans in its place - possibly under the leadership of the former Afghan King Zahir Shah.        Mr Naik was told that Washington would launch its operation from bases in Tajikistan, where American advisers were already in place.        He was told that Uzbekistan would also participate in the operation and that 17,000 Russian troops were on standby.        Mr Naik was told that if the military action went ahead it would take place before the snows started falling in Afghanistan, by the middle of October at the latest.        BBC News, "US 'planned attack on Taleban'", 18 September 2001.         http://www.thedebate.org/thedebate/afghanistan.asp

"The BBC features video of the aftermath of four bombings in Aleppo, Syria that have killed more than 50 people yesterday. The Al Nusrah Front for the People of the Levant, an al Qaeda-linked jihadist group that is fighting the Syrian government, has claimed credit for the attack."
Read more: http://www.longwarjournal.org/videos/2012/10/aftermath_of_aleppo_bo...

"The BBC's Jim Muir: "Whoever did this was aiming to cause the biggest psychological as well as physical blow to the state presence in the city" 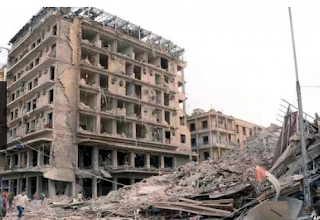 "At least 34 people have been killed and dozens wounded in a series of bomb explosions in the centre of Syria's second city, Aleppo."

The map is off.  The United States has bases in Kuwait and Bahrain as well.  I've been to a number of military bases in the Middle East, including multiple in Kuwait, and Iraq, and one in Qatar.  The primary reason that the United states is not getting involved in Syria, is that the American population is still war weary from Iraq and the ongoing conflict in Afghanistan (which I may be visiting within a year), and will not tolerate another large scale American conflict in the Middle East.  This is also why the United States only provided logistics to the change of leadership in Libya, and did not send front line soldiers or attack aircraft into the region.

The American flags Indicates United States Military bases, Notice that Iran is in their way. Also, Notice how close they are to Syria but do not get involved helping the people. 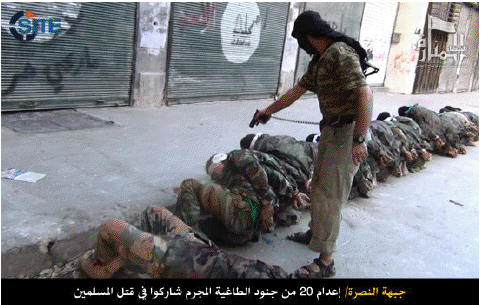 However, al Qaeda is helping notice them executing Syrian troops just like they did march 2012 of Iraq police in Liberated Iraq as stated by our government. Around 200 Iraq’s are blown up weekly. Yes your right about US government wants to dominate the world. Read my blog:

Amazing that we pay billions of dollars to Pakistan where Osama Bin laden lived for nine years near a military academy.http://charliebigfeet.blogspot.com/2012/05/government-games-cost-li...

Question: What do all of those flags on the map represent?  I would say that the United States government is not sabre rattling about Iran, but encouraging Europe, Turkey and Russia to take more action to prevent Iran from gaining full nuclear capabilities.  Also, I would like to point out that the united States military does have a plan to invade every country in the world, and variations of those plans depending on who is willing to work with us.