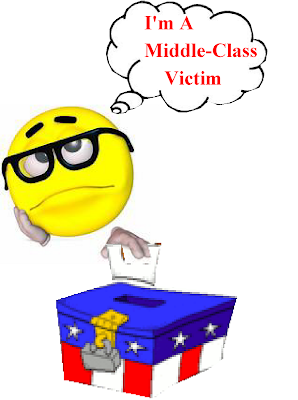 "MIDDLE
CLASS"  ARE 72% OF POPULATION AND CAN PUT ANYONE IN THE WHITE HOUSE AND IN
CONGRESS. BUT! THEY ALWAYS PICK A "UPPER-CLASS" POLITIICAN THAT CARES LESS FOR
THE "MIDDLE-CLASS" WORKING-CLASS"
AND THE POOR.
THEY WONDER WHY "MAIN STREET" IS HURTING. 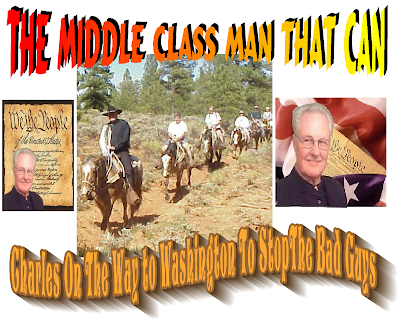 LOOK AT CHARLES HARVEY, http://charlesharveyforpresident.com.
A PRESIDENTIAL CANDIDATE THAT IS WELL EDUCATED, BRIGHT, HAS A GOOD HEART AND
SOUL, AND CAN MAKE COMMONSENSE DECISSION BASED ON WHAT IS GOOD FOR THE MAJORITY OF AMERICANS. YOU DO NOT HAVE TO BE WEALTHY NOR A POLITICIAN TO LEAD AMERICA IN THE RIGHT DIRECTIONS.

I belong to he "Middle-Class" Party, because the Demacrate Pary and the Republican Party have done nothing for the "middle-class" in Forty Years.

Presdient Obama was stonewalled mostly by the Republican Party. I believe The Voters are finally getting it after decades that both the Demarcates and Republicans that have failed us for Thirty Five years.

1. USA Largest debt in the world of all Nations.

3. USA numbered One out of 100 Countries giving funds to Foreign Countries. $23 Billion

Click and see real time cost of both wars in Iraq and Afghanistan.  The cost of Libya 3 days over $250 Million.

18. Allowed Tax
Breaks for the Wealthy and Tax Loop Holes for  Corporations.

The presidential
candidates for 2012 are really a joke that I'm afraid that many take them
serious. As a retired clinical therapists that spent years diagnosing and
profiling people, I can see right through the candidates. I am not talking about
the obvious dumb things they say, but their personality, strengths, and
weaknesses. 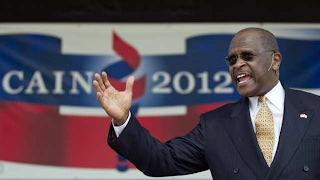 Herman Cain
All about Him. Who
does he admire? Himself. Supper-Ego. Out of touch. Thinks all black play the
race card. If a person does not have a job it is their own fault. His knowledge
base is Pizza, he even sings a song "imagine a world without Pizza. Cain speaks
rhetorical *BS, what he thinks people want to hear. He has Two personalities.
The one you see in the media, and the one you do not see. If he says something
people do not like, he will say he was joking. Loves to live the high life and
hang out with the "big dogs." 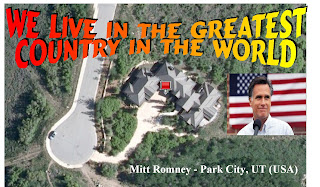 Mitt Romney
Mr. Flip Flop on many
issues. He is like a Republican Flag that goes in the direction the wind is
blowing. So out of touch with "middle-class" he has never
ever been near a middle-class life. All talk. He is a man in a empty expensive
suit. His favorite quote , " We live in the greatest country on earth" Send him
the 20 things that are not so beautiful about America I listed above.

Michele Bachmann
Her strength is following, but she would need to be
told how and what to do. .Not a leader. Thinks God makes Huricanes to get
Americas attention. Thinks the earth is only a few thousand years old. She said,
''Carbon dioxide is portrayed as harmful. However there isn't even one study
that can be produced that show that carbon dioxide is a harmful gas.'' She also
said. "But we also know that the very founders that wrote those documents worked
tirelessly until slavery was no more in the United States."That would make our
founders living a very long time since they wrote those documents in 1776, and
slavery officially ended in.1865, and they were not springs chickens at the time
of the writing the Constitution. 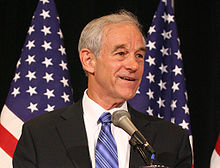 Ron Paul
A very honest man, I respect, however! He has extstream and radical ideas on the function of Government. The people formed a government through election to guide and help America prosperous and safe. Not sure if any
of the 20 problems I listed are on his list to do.

Gary
Johnson.
A proven track record, Born in the "middle-class" and in touch
with the people. 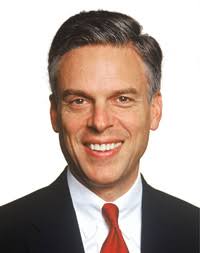 Jon Huntsman
From the rich and for
the rich, I believe he would not change or solve any of the 20 problems listed
above. 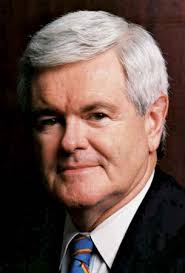 Newt Gingrich
Hangs with top Dogs,
Loves media attention. Great giving lectures if you interpretor. "middle-class" can
expect nothing from him from him.

President Obama.
Very presidential and intelligent and I think he
would give us results in his second term. He has been blocked on all things to
help the middle class from the Republicans. Obama only received backing from the
Republicans if it was for the wealthy like, "Wall-Street. So less Republicans
would help him accomplish more. If you do not pick me, then give him a second chance. 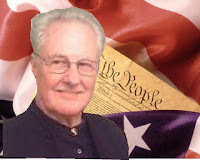 The Unknow man From The "Middle-Class," That can. The powers to be ("Upper-Class" and The "Big-Six"Media Corporations)
refuseses to give any media coverage because he is not from the "Upper-Class." He would make a great President for the
people. He survived being abandoned, abused as a child in every way you can
imagine. He is a recovering alcoholic 32 years, and knows what is like to live
on the streets and to go hungry. Here is his house, please compare it to Mitt Romney's house as well as the other "upper-class Wealthy presidential Candidates, and ask yourself who do you think would most likely help the "Middle-Class" that live on "Main Street USA, not "Wall Street." 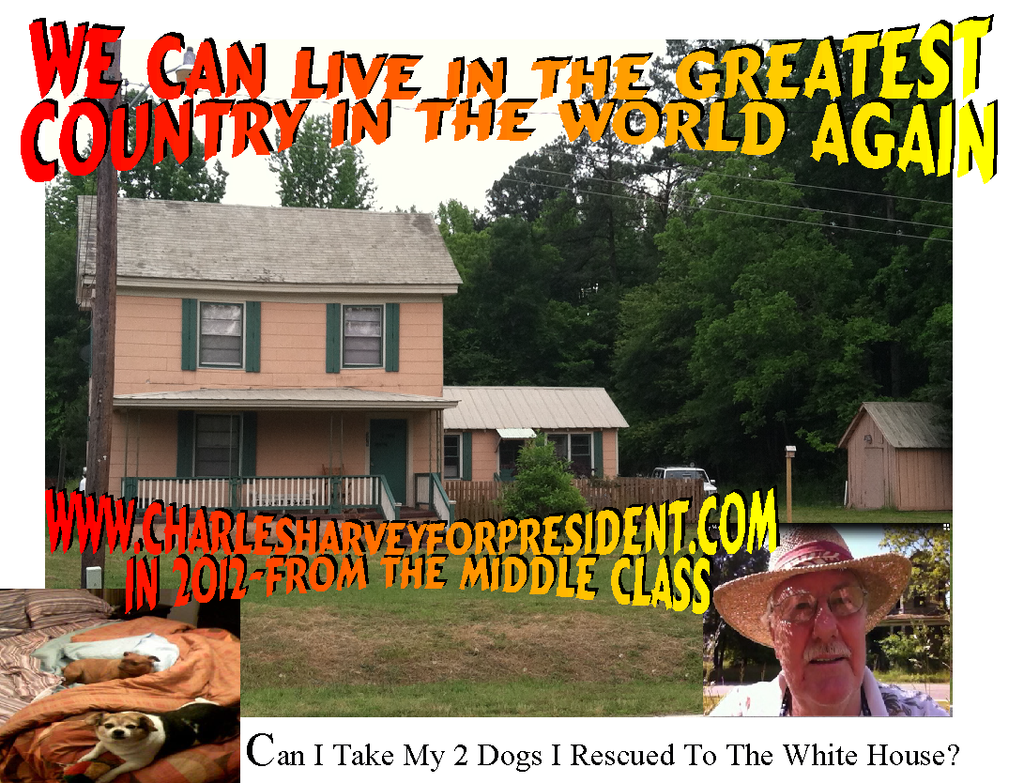 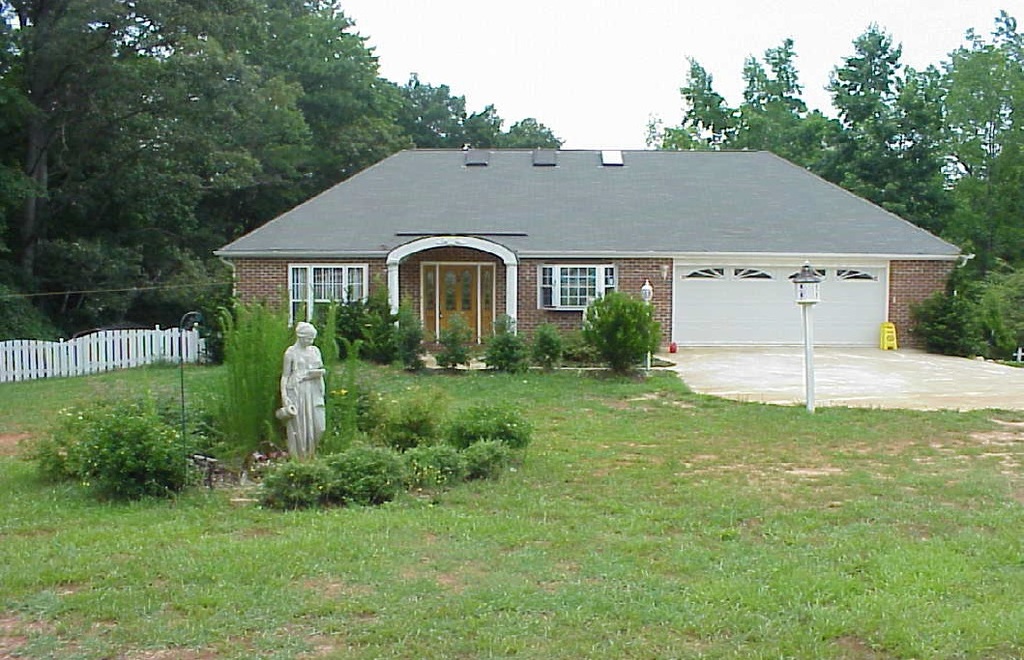 The Home I use to live in. No regrets ut lots of gratitute

He would stop earmarks and have clean bills. He would close tax loop holes for
the wealthy. He would have American corporations be charged for offshore
banking, Outsourcing jobs and manufacturing, If he could not stop it by
implementing new laws. He would not use Military intervention in conflicts that
are not a direct threat to Americans. He would cut the Military Budget for new
weapons and put it towards servicemen and their families and Veterans benefits.

He would close down the Department of Education. He would withdrawal military out Muslim nations. He would work on Americas challenges above. Think about it, a first "middle-class" President, from a tough life always picking himself up, and trying again and again, and accepts responsibilities for his actions, without blaming others. The "Upper-Class" would never want a man like
Charles Harvey as president, his belief and values is best said by George
Bernard Shaw, "I have to live for others and not for myself: that's "middle-class" morality." http://charlesharveyforpresident.com.


"I have to live for others and not for myself: that's middle-class morality."
George Bernard Shaw

"Nothing in the Constitution says we have to be governed by the upper class.

Replies to This Discussion

There is good stuff and not so good stuff in this discussion opening. I think I like more than I don't like. I would like to respond to some of the ideas here, in small increments.

Well I really liked Abraham Lincoln, based on what I do know about him. He gave Us the motto "Of The People, By The People and For The People". Which I feel is very powerful for Us, if We could only wake up and rise up to fulfill it in Direct Democracy. Is Lincoln one of the Presidents that you refer to as "Well Educated"? Is he one of the three presidents that were not former politicians?

Initially, I have to further respond that I am ready to try, in my lifetime, a President from the "Middle Class", (one of the 99% or 72% if you will), but this is with a certain reservation that is connected to the thought that "Power corrupts and absolute power corrupts absolutely." I suppose just about all Humans are subject to this dark influence. It is part of the way that We are tested for quality of self. Even with this consideration a "Middle Class" President is worth a try.

I apologies by not clarifying "well Educate."

americanhistory.about.com/.../abrahamlincol...
"Lincoln himself stated. That he had about, one year of formal education. However, he was taught by many."

Going to Universities as I did in my forties, did not make me smarter than Lincoln. However I did live a childhood far more severe than Lincoln's, and that gave me greater knowledge to help those in need.

It Also gave me Strength to get up and fight for those in need. Terrible decision has made by well educated president for several decades.

The fact I slept on skid row in my Twenties, and the last time at age 39, was an educational,  you cannot learn at Harvard or Yale, nor living on "Wall Street"

Lincoln did not have:

2. Did not have a focus group, to tell him what to say,wear, or instruction on Body Language.

3. He did not have to win Iowa Or New Hampshire Debate.

4. He did not have to win the "The Electoral College to be President.

5. He received media coverage such as it was, both good and bad

6. Did not have to have 4% In the polls to debate in public.

7. Did not have to be wealthy, Politician to debate or have Media cover him.

It took me from Aril 3, 2011 till November 29th, to get one newspaper, in all American? Media, to cover a man from the "Middle Class." You have not seen any one candidate from the "middle class," on CNN, that is running for President. CNN only gives wealthy, Politicians, from the "upper class." Remember that all in Congress are upper class," with over 250 Members of Congress are millionaires. Also during the recession, Congress wealth increased 23%, while "middle class," lost 16% of worth.

I have research, and written, over 170 blogs at: http://charliebigfeet.blogspot.com/, they cover America's problems and solutions.